It’s 36 degrees at Lake Decker on Oct. 29, and PEC Member Services Agent Charlie Moore is freezing. He’s about to compete in his first Ironman triathlon ever, the Ironman 70.3, a race consisting of a 1.2-mile swim, a 56-mile bike ride and a 13.1-mile run. He never thought he would compete in an Ironman competition, let alone lose 120 pounds in only two years. Moore trained on his bike for six-hours every Saturday morning leading up to the Ironman 70.3. Moore completed the Ironman 70.3 in 6 hours and 25 minutes, beating the required finish time of eight and a half hours. 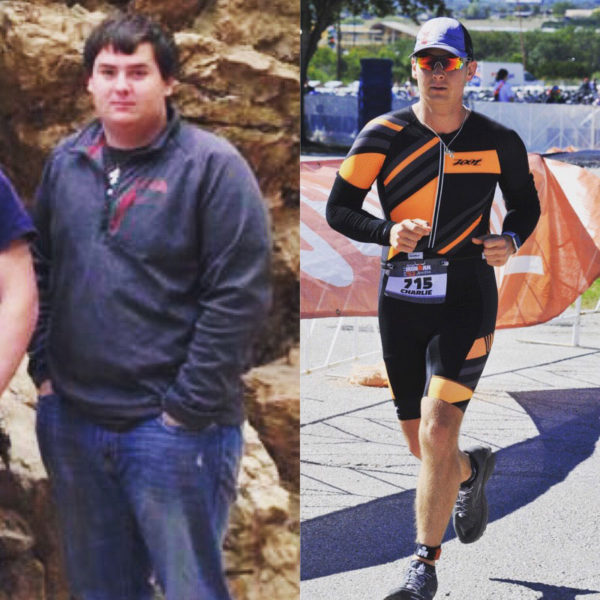 In a matter of only two years, Moore has lost 180 pounds while training for an Ironman triathlon.

“I had been 300 pounds since the seventh grade, and I knew I needed to make a lifestyle change,” Moore said. “My friend, Michelle Means, and I started working out together, and we just stuck with it.”

Preparing for the Ironman was no easy feat. Moore would begin his day running five miles in the morning, go to work and then run a couple more miles in the evening. On the weekends, he would take 6-hour bike rides in the morning and go running right afterward. Sundays were reserved for swimming, where he practiced in the Dripping Springs YMCA pool. He would swim exactly 96 lengths to practice going the 1.2 miles required during the Ironman. And every time he trained, he timed himself to prepare for the big event.

When the clock struck 7 a.m. at Lake Decker, Moore was off. He and his fellow competitors were clumped together in the lake, kicking and hitting each other while they swam the freestyle stroke in the dark water all the way to their bikes. After he completed the swim in 32 minutes, Moore was relieved to hop on his bike and start pedaling.

“The swim was the easiest, despite the mass of people, but riding my bike was the most relaxing part of the race,” Moore said. “We rode all around city limits as well as hit a few small towns like Manor until we ended the bike trail at the Travis County Expo Center. That’s when the final stretch hits you hard.”

After three hours of riding his bike, Moore “felt like Bambi” when his legs transitioned from his bike to running full speed to the finish line. He felt good running the first six miles of the race, until suddenly he began feeling a grinding sensation on the back of his ankle.

“I had an injury to my Achilles tendon during training, and then it came back during the last half of the run in the Ironman,” Moore said. “It hurt so bad, but I couldn’t quit. I had to finish.”

Tears welling up in his eyes, he pushed through the pain and finished neck and neck with his friend, Means, at 6 hours and 25 minutes, beating the required finish time of eight and a half hours. Moore was thankful to be done, and he reunited at the finish line with his family, who had been cheering him on from day one of his training.

While Moore is taking a break during the holidays to let his injury heal, he’s not done competing just yet. Starting in January, he and Means will be training for the Ironman Triathlon (a 2.4-mile swim, a 112-mile bicycle ride and a marathon 26.22-mile run) taking place in The Woodlands in April. It’s considered one of the most intense one-day sporting events to complete in just 17 hours, but Moore is up for the challenge.

“This whole experience has taught me so much: responsibility, self-worth and to respect myself,” Moore said. “It’s all worth it, and I can’t wait to compete in April.”

It hurt so bad, but I couldn't quit. I had to finish.