Being a lineworker is hard and dangerous work that can require spending time away from home and family. When a member has an issue, PEC sends a crew to resolve it, day or night, rain or shine, holiday or not. On Easter Sunday, a crew in our Cedar Park District was called to service an isolated outage that affected a few of our members. One of those members had such a good experience, she wrote a letter to express her thanks.

Judy Geddes and her husband arrived home from their Easter outing to find their power out and several PEC trucks and lineworkers on the job. A fire at the neighbor’s house had overloaded the secondary service and caused the outage to spread to Judy’s home. In order to safely fix the problem, the crew needed to run new service lines, which required tree trimming.

Regional Operations Supervisor Ronnie Taylor was leading the crew that day, and when Judy shared that her husband had recently suffered from a stroke, he made sure to keep her informed about when she could expect to have the lights back on.

In the letter she sent us, Judy says, “I am writing to let you know how much we appreciate the young men who were working throughout the afternoon on our property.” Judy was impressed with how thorough of a job the crew did, and how they conducted themselves while they were there. “They worked hard and never grumbled about missing Easter with their families,” she said.

When asked about working on holidays, most lineworkers simply shrug and say “this is what we do.” However, having that sacrifice recognized is always rewarding. “It takes a lot for someone to sit down a write a letter like that,” Ronnie said. “We really appreciate it.”

Judy praised Ronnie in her letter for keeping them informed of their progress, and for going above and beyond after the job was done. “Ronnie called me later in the evening to reassure me that our house was secure,” Judy explained. Ronnie even took the time to speak to her electrician the next day about replacing the breaker box.

For his part, Ronnie passes most of the credit on to his team. “I had a great and experienced crew with me that day,” he said. “Their skills and hard work allowed me to focus on keeping the member informed and helping her feel confident that we would get the job done and keep her family and home safe.”

“They worked hard and never grumbled about missing Easter with their families.” 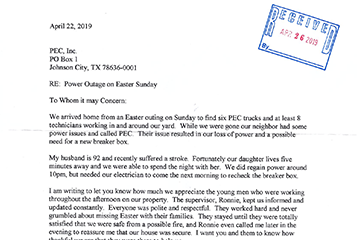